We just got back from a long weekend in Orlando. I had some business to take care of in Winter Park on Friday and then we decided to enjoy a day at “Sea World” and then take a leisurely ride home on Sunday, which was Father’s Day – and I happen to be married to one of the best fathers in the world! My sisterJennifer and her roommate Rachel went with us. They are the best!! And definitely made the trip more memorable.

Noah was featured in the new Shamu Show “Believe.” The Show itself was incredible – but as a mom it was so moving to see my child so excited about something. They asked him what his dream was – and he said to be a veterinarian. He beamed when they took him down to the front of the theater and showed his image on the huge screens. It really was a neat experience. After we left the Show he was still buzzing about how cool it all was. We asked him,”Noah, which was more exciting? Be in the ‘Believe’ Show just now or being on national television on ‘The Biggest Loser’?” He thought about it for a
second and said, “I guess the Shamu Show just now…because there were so many more people watching.”

The whole day was interesting – – different this time – – but in a lot of good ways. As I’ve said before – food is going to always be an issue for me. Making good choices is a decision that I’ve got to make every day. And it’s something that does get easier in some ways (because I know Jillian will fly to Florida and kick my butt if I don’t), but it would still be very easy to fall back into bad habits. So I was SO EXCITED to see that Sea World now has a healthy alternatives restaurant called “Mama’s Kitchen.” If you are visiting the park you really should try it. They’ve got salads and turkey sandwiches and
whole wheat pasta salad. They even have sweet potato chips. It was good to see that mainstream venues like Sea World are offering healthy options for those of us who are trying to eat right – but want to still enjoy all the fun everybody else is having. 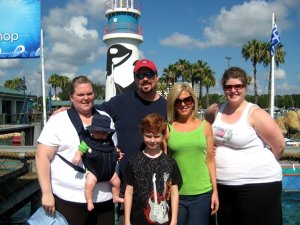 And I know this probably sounds silly to mention – but I haven’t been to a
theme park in years. And I couldn’t believe the difference in how it feels to
sit on a roller coaster and not be afraid that the bar will fit over me. Or not
be embarrassed on a ride that my butt is spreading over into the seat of the
stranger sitting next to me. It was a great feeling!

So I guess that’s it. I just wanted to share a little bit about our weekend. I
hope everyone is having a great week so far and that all you dads out there had
a blessed Father’s Day.